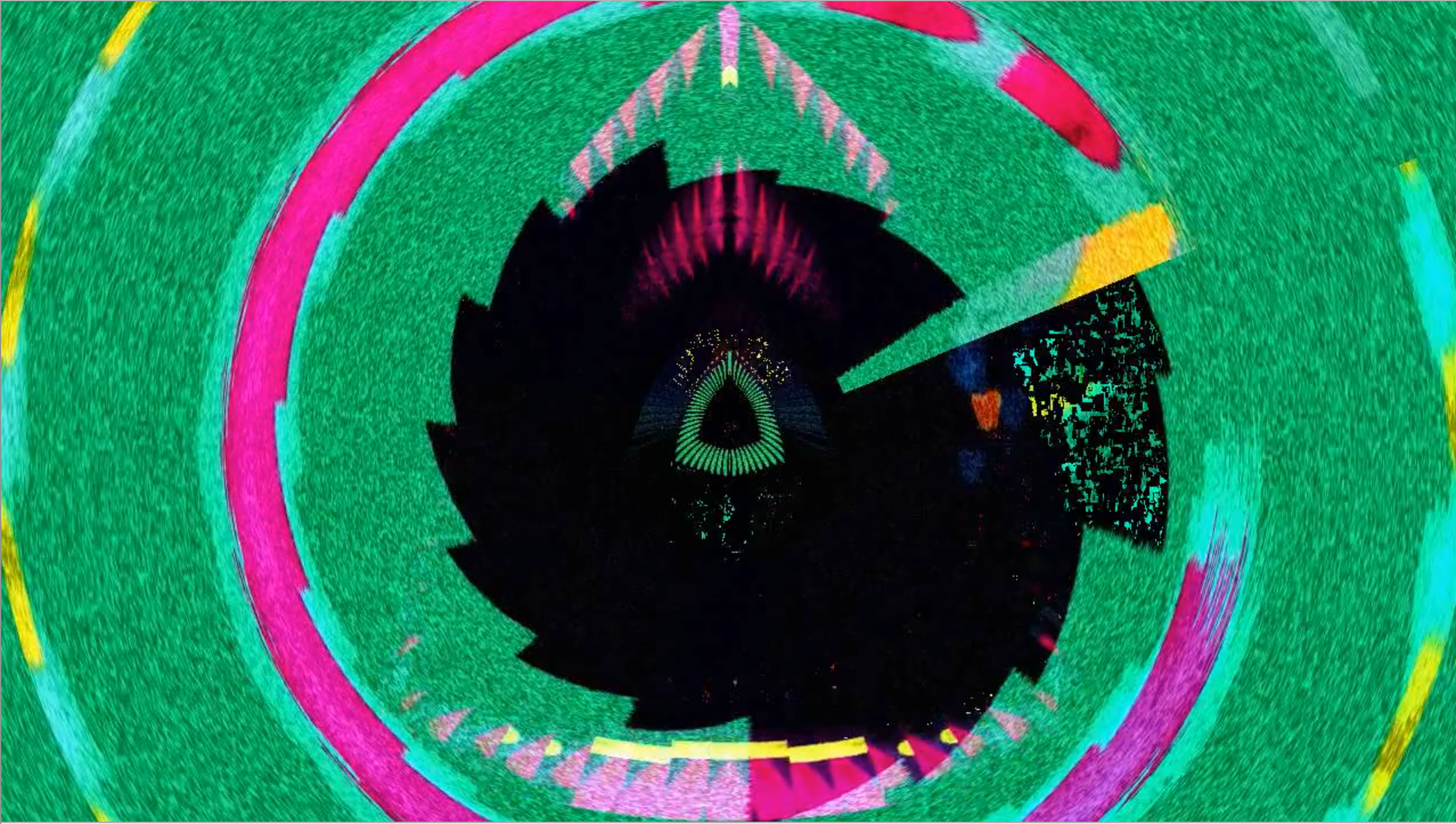 Infinite Objects makes video prints — small screens playing one single loop forever. Unlike other video frames (including my beloved Electric Object), the video cannot be swapped out. I was intrigued by this limit and excited by the opportunity to have one of pieces keeping me company in my “office” (dining room). I thought I might eventually get sick of looking at the same one-minute and forty-two seconds over and over, but I have not. Instead, like a certain famous man at a pond, I’ve been falling for it more and more. In that spirit, it seems like a good work to use to demonstrate my process.

One of the most characteristic elements of my approach is its sense of accretion. This reflects its roots in live code, where starting with an empty file and building through the performance is a common form. Building into non videos with a longer development timeframe, this has expanded to encompass multiple passes through various forms of processing — often at varying resolutions — which in turn generate artifacts and add multiple depths to the final abstraction.

I also tend to make short videos and then keep reusing them, processing them, cutting them up, and doing it again. Multiple disparate works can emerge from the same base footage. Some of this is practical impatience — I want to mess around; I grab a file from the desktop; something magical happens and it's all new again — but it's also conceptually vital.

I want to stretch the machine and its effects, benefit from errors, see what can be dug out of simple representations, and work with what's at hand.

The video here, 01.02.2021, showcases the rhythm, grain, and sense of visual eruption that result from these approaches and concerns.

So let's check out the steps.

The initial footage for any project usually comes from La Habra, the framework I build to live code svgs with Codie.

In 01.02.2021, the base footage came from the same footage I used in Parasido, part of my NEoN/Indeterminacy commission. 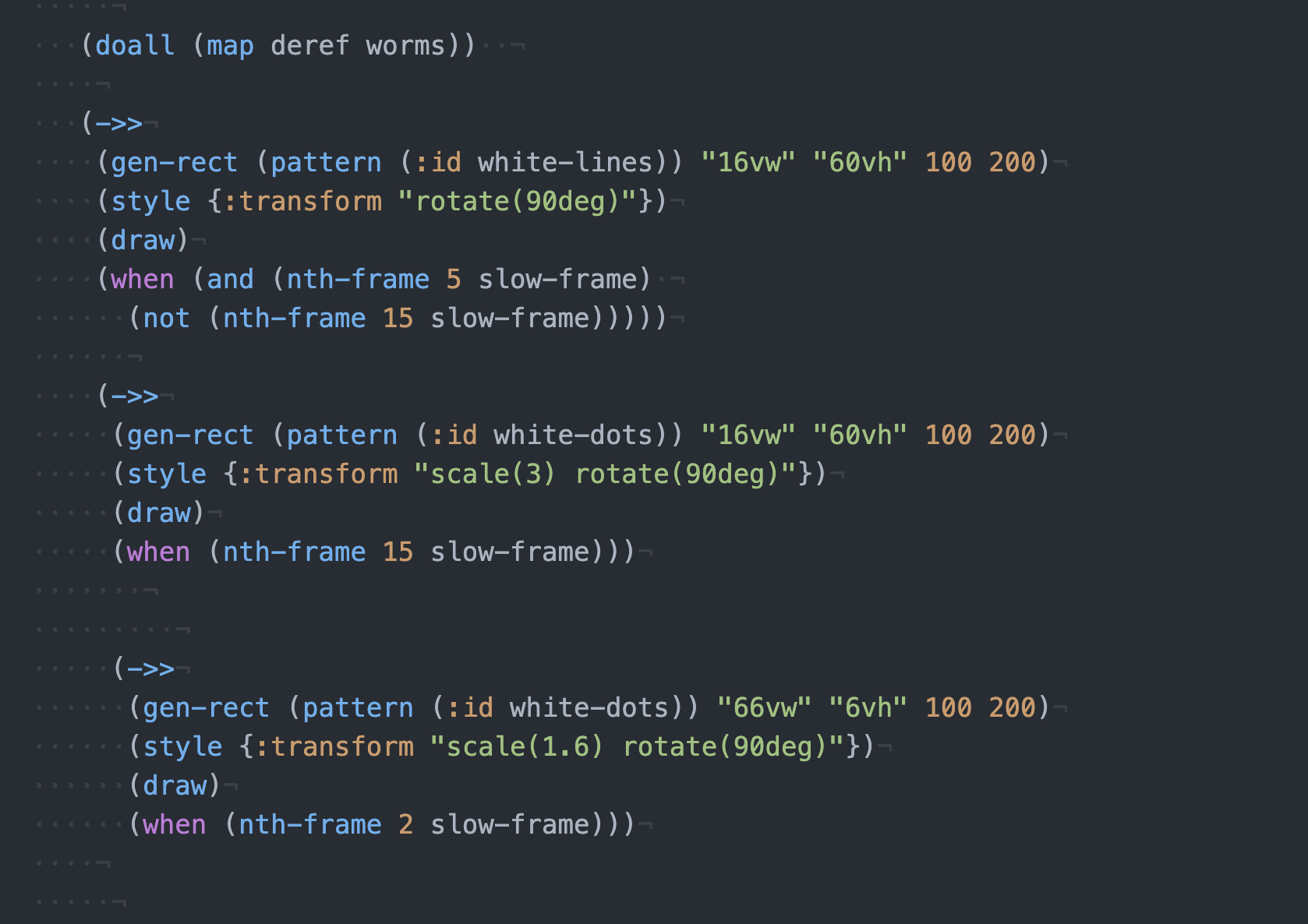 This itself is a more constrained and directed version of combinations that became motifs in Codie practices and performances. In this case, I've mostly brought over wormy effect created by outlining a blob shape with a dashed line and then animating the dash position — a similar approach is used to animate SVG line art, like logos. 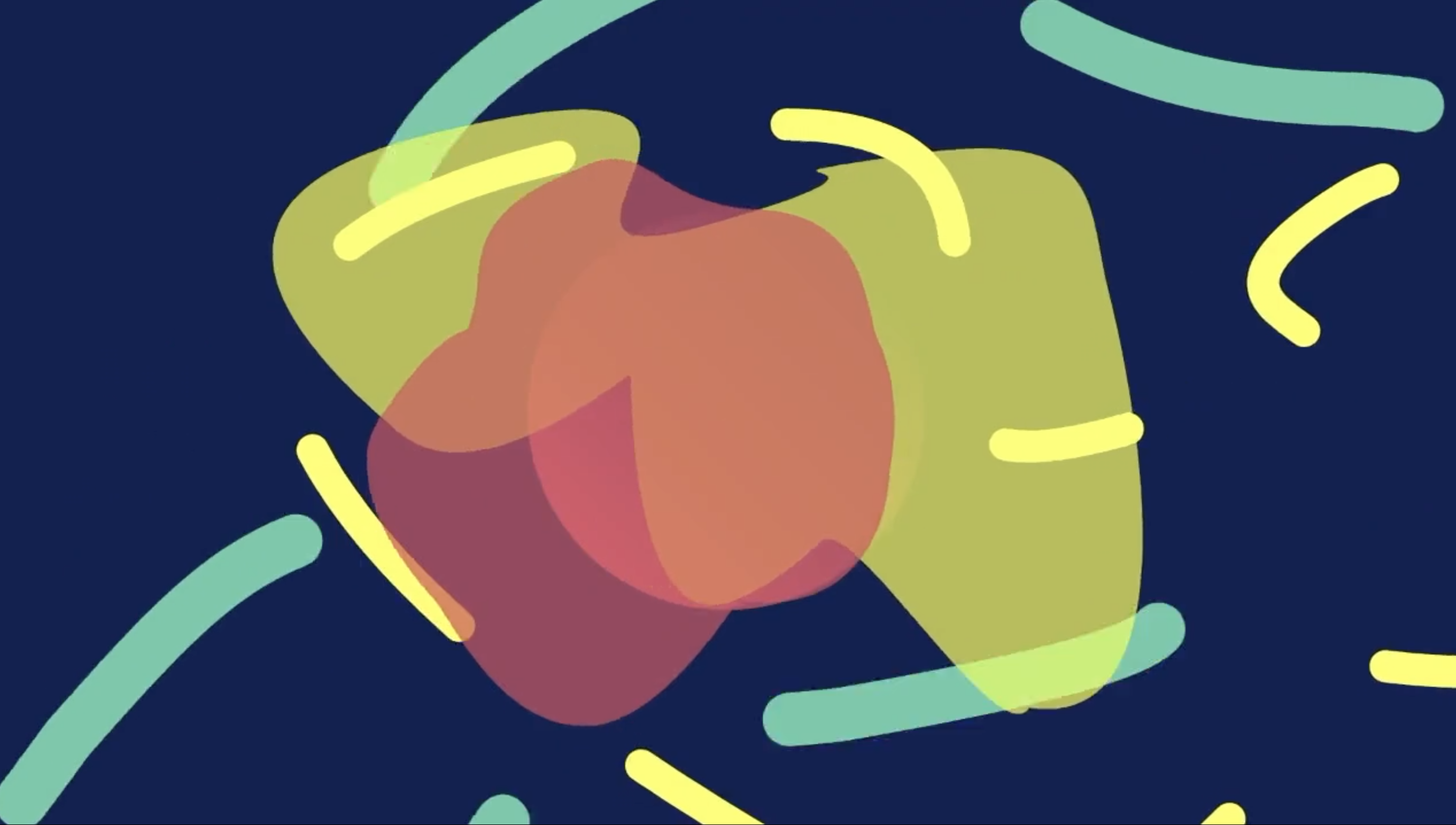 Sometimes when I make La Habra footage to be used in a more structured video, I will use utility functions to add elements at a specific frame. (I did that, for instance, for the Reckoner video.) In this footage, I added elements on the fly, so it was as little looser.

Step two took me to the UVS.

The UVS, or unnamed video synth, is a small p5.js program I wrote to translate and warp La Habra files. It’s not properly a synth at all, but there's no accounting for naming. The UVS has three modes — chunk, wrap, and stretch — which add more overall motion and segmentation to videos from La Habra.

I originally made it because I did not have access to an analog synth that I had previously used to move the footage around more holistically, but the frame buffer (more on that below!) really wanted footage that moved this way. There are other programs that will do this for you, with fewer bugs, but the strange behavior that comes from the personal software adds a flavor that makes it more mine.

Here, chunk mode is used with a moderate horizontal velocity, which counter-intuitively makes smaller chunks, and the video mode set to play through. The background color alternation creates the solid color blocks, while the noodle-y lads create these moving staccato lines.

A few months after Parasido was finished, I decided to start playing around with VDMX, a VJ tool created by David Lublin, that makes it easy to apply shader effects to videos and otherwise cut, morph, and combine them. I could type for quite a while about how it's a sterling example of a tool optimized for exploration, but that’s a different article.

In VDMX, I created two layers of the same video with different effects applied. One is a radial circle effect and the other is the shape morph. To both, a VHS Glitch has also been applied for graininess.

In these we can see how the forward momentum, created in the UVS step from the more bounded motion of the initial footage, is transformed again into two types of movements: the circular but still fundamentally linear aspect of the radial element and the constrained outlines of the shape morph.

This see-sawing of form with the same base elements can give works a sense of continuity and character while layers bring in depth. Likewise the alternation in luma means the entire face of a shape is not active all at once. This is nice in itself but also leaves room for further processing, especially since luma masks are very useful for deciding where to apply effects.

It’s also probable other effects that I forgot about were layered in. Like the balance between linear and constrained motion, I like my projects to have a balance of intentionality and comprehensibility on the one hand, intuition and irreproducibility on the other — to screw with my own expectations of machine control and perfectability as much as anything else. In this case, there may have been some audioreactive hue shifting based on whatever I was listening to while I played.

At this point, we can see that the video is nearly done.

But there is one step left: a little more chaos.

The last and most chaotic step for a number of my pieces is passing it through the Frame Buffer app from Signal Culture. In my life-changing residency at Alfred University’s IEA, I was very taken with the analog frame buffer and the frame buffer capabilities in the Fairlight CVI.

These echoed the rhythm and repetition I use in my original Codie/La Habra footage — driven there by the audiovisual dialog at the core of Codie’s shows. They also, more than a lot of other processing effects, are amenable to ongoing tinkering and live manipulation. Since they work well along a range and are in dialog with changing elements in the video itself, they can be used almost as an instrument in themselves. This also contributes to irreproducibility. It's possible that given enough time and practice, I will always improve at predicting the result of a given change, but there are usually enough elements that it escapes roteness.

Bereft of an analog synth at home, Signal Culture’s app allowed me to get some more of that action with just my laptop. When the pandemic started, I bought a little midi controller and started to get more comfortable with the inputs. (Serrated is one of my first pieces done with the frame buffer app and CVI footage.)

Effectively, the app lets one set the number of frames to repeat; the max luma that should be keyed out and replaced; the min luma that should be shown in the repeats; and the repeat decay rate. Using the midi sliders to move through these ranges, elements can be added, persisted, repeated and disappeared.

This pass contributes eruption or blossoming effects, in particular, as well as sometimes dialing down the linear progression of the radial layer and bringing in more persistent circles. 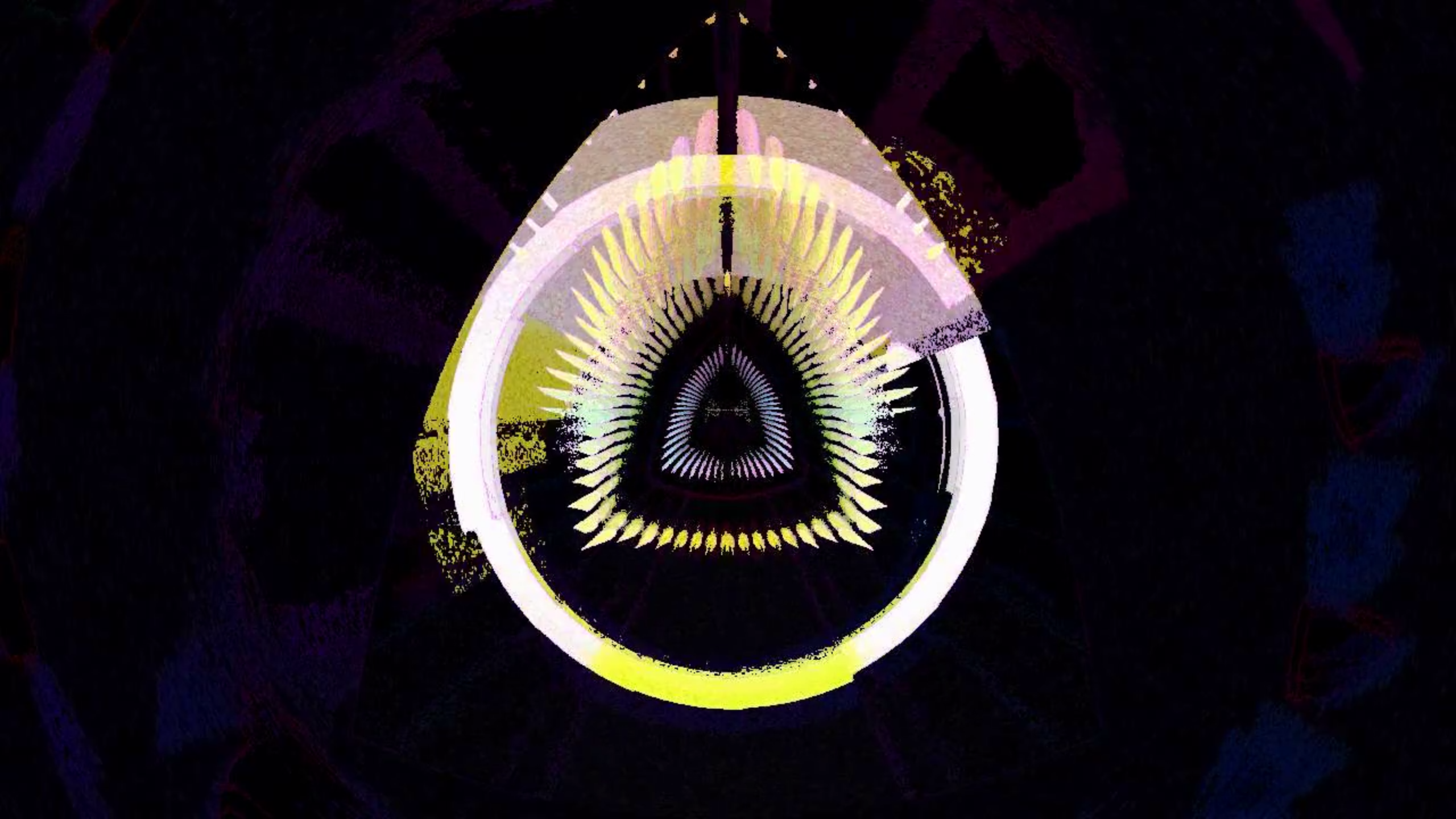 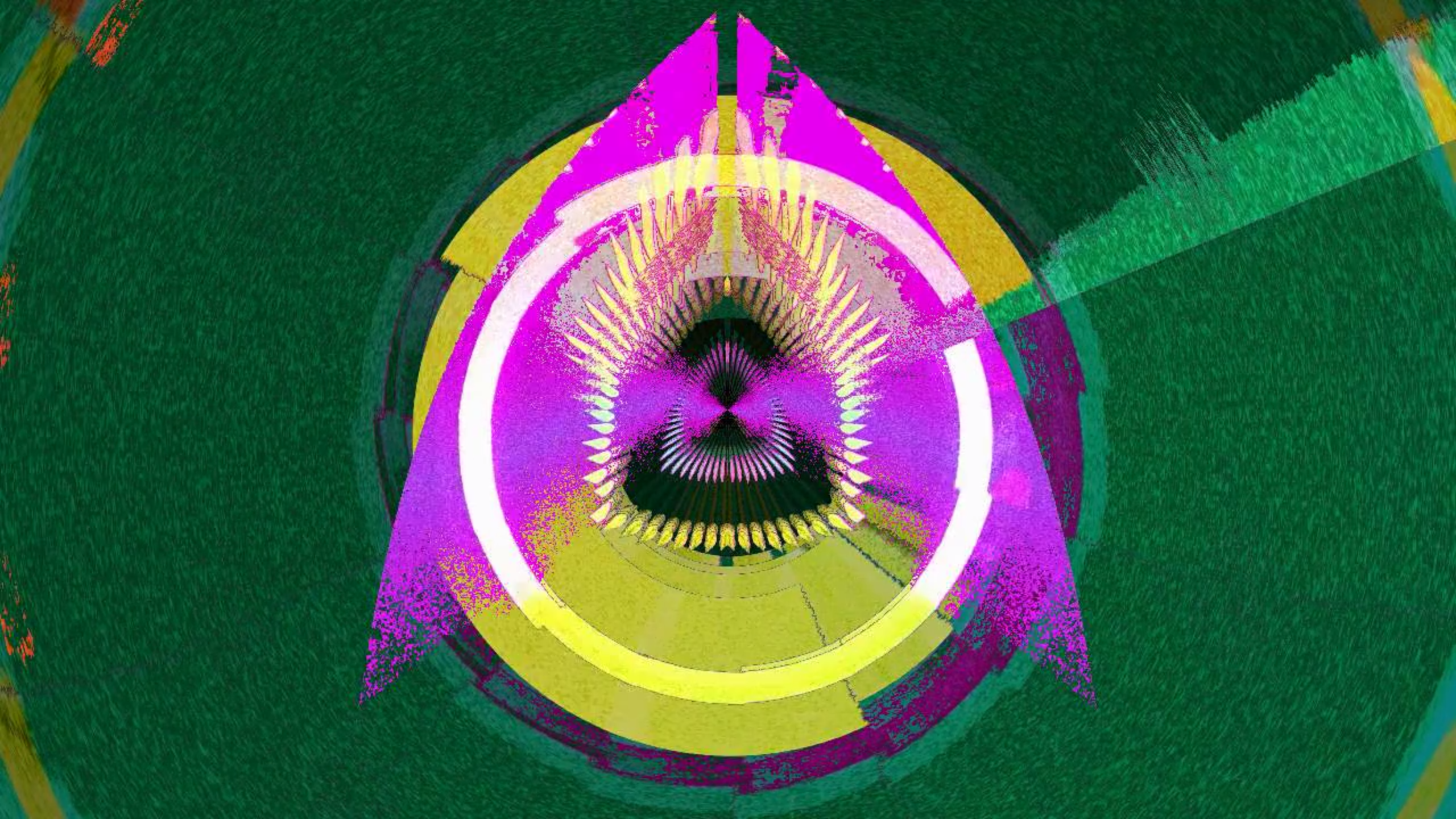 In other works I have used the frame buffer to add maximal chaos, but in this case I was a bit restrained. However distinctive artifacts of the tool are present.

At the start, we can see the app’s luma lowest level is not actually set to black, so even with no change, some artifacts appear in the black circle. From :45 to 1:15 or so we have a high luma mask but let all the lightness through. The blossom around 1:42 reverses this relationship.

Overall the persistent hole at the center; the tension between the radial progression, outlining and blossoming elements; and the luma variations resulted in a video I find an adequate formal reflection of winsomeness and longing. It is both bright and sad and rewarding of my sustained focus. Maybe for others, too.

And that’s it! A deep dive into one work.

This particular process is missing the analog rescanning and effects processing that a lot of my favorite footage has, but the VHS Glitch and frame buffer helped get a little mess in until I am able to recreate my ideal rescanning setup.

Thanks for checking it out.